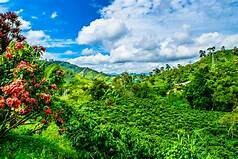 An Olam premium brand specialty coffee, Colombia Dulima is an Excelso EP grade coffee sourced from high altitudes in the Tolima and Huila growing regions. As an excellent single origin or consistent blender, this washed coffee is smooth and clean, with a pointed acidity and good body.

The spread of coffee planting throughout Colombia in the early 19th century is attribute to a priest who made coffee planting a penance for his parishioners. It worked. Colombia is among the largest producers of coffee in the world, and was number two behind Brazil for decades. The Tolima growing region is named after the Tolima district, which was home to Pijaos before the Spanish arrived. The Pijaos were known among the Spaniards as fierce defenders of their homeland, which they called Dulima.

Save this product for later
Display prices in: USD